What is your favorite part of your job?

My bosses for sure. Angela White and Katie Benson have both always been there for me when I needed them most, as a boss, mentor and friend. If it weren’t for the family at Two River I wouldn’t keep coming back. Also the Patrons and Donors are almost like an extended family. Seeing people come back over and over, you form connections with them through the mutual love of performing arts.

Why is Two River Theater special to you?

Because even with the nation recognition Two River has received there are still people who don’t know what Two River is about and how special every staff member and production truly is. It has opened so many doors and opportunities for me, and opened my eyes to things I never thought I would have interest in. I will always speak highly about the work done at Two River and be it’s biggest advocate.

What was your favorite production to work on and why?

(A Funny Thing Happened on the Way to the) Forum was my second show working at the theater and took my breath away. It was so good and made me so proud to do my little part in the theater. 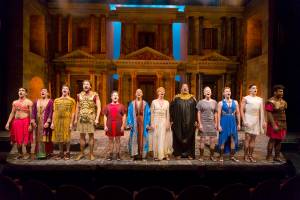 The Company of A Funny Thing Happened on the Way to the Forum. Photo by T. Charles Erickson.

If you could go back and work on a production before your time at Two River, what would it be?

BE MORE CHILL!! Also, I saw Jacques Brel Is Alive and Well Living in Paris with Lindsay Mendez and Wendy Wasserstein’s Third before working at the theater and those were fundamental in my love for theater. I would love to have been a part of all three.

Anything Cluck-U or wings from Urban Coalhouse.

What’s your favorite thing to do/hobby outside of work?

Performing. I am currently a Music Theater Major at New Jersey City University

Tell us a fun fact about yourself.

I have wanted to learn how to play piano for a long time, and recently took a class for beginners. Since stay-at-home, I have had an opportunity to practice everyday and have been teaching myself new music.